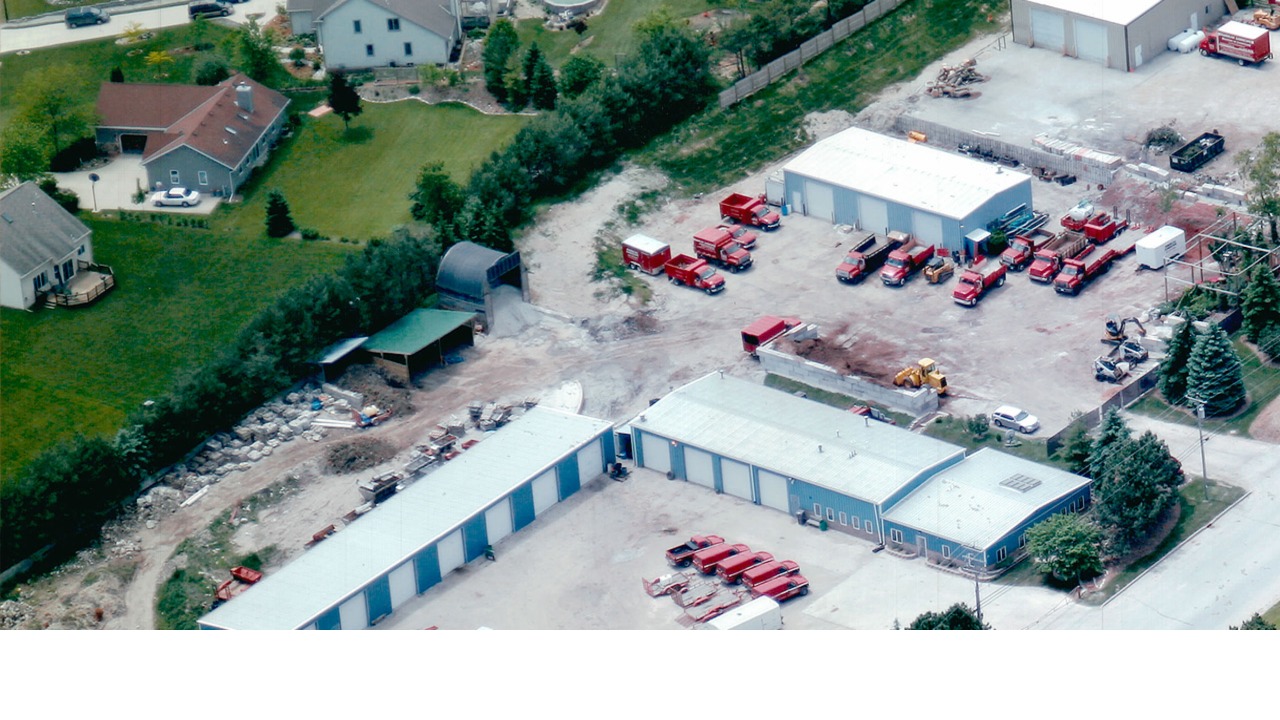 A Journey That Began in a ‘Tosa Garage’

Tyrrell Hughes, the founder of American Landscape, was raised on a farm in a small tight-knit upper midwestern community, went to school in a one-room country school house, and worked the land as a boy, alongside his father, Maurice.  Maurice was an early practitioner of sustainable agriculture and conservation, taking a rundown farm that would grow corn only 4 feet high and yield barely 35 bushels per acre, and through patience, hard work, suffering and practicing restorative agriculture, changed that land into the most productive in the area, winning a national award.  Tyrrell once wrote, “I remember to this day my father scooping up soil in his hands in a freshly plowed field on a Thanksgiving Day, running it between his fingers, demonstrating he could tell by feel the qualities or deficiencies of that soil”. These early experiences proved profoundly formative and ultimately led Tyrrell to return to working the land, but in a different way than his father.

In the winter of 1972, now married with 3 young children, Tyrrell found himself out of work from teaching, his earliest professional calling.  He was attracted to an ad in the Milwaukee Journal for a franchise called “American Lawn Service”.  It was the age of franchising and Tyrrell saw an opportunity to return closer to the land and to his roots.  But, as Tyrrell likes to say, it was the red trucks, his favorite color, that caught his eye and sealed the deal!

Like many start-ups, American Landscape had humble beginnings.  Tyrrell began the company as a small lawn mowing operation out of his Wauwatosa driveway, with just a truck, a Simplicity riding lawn mower, a small trailer, gas can, hand clippers and very few extra nickels to spare.  Within a year’s time, he rented a nearby residential garage to house his still fledgling arsenal of equipment.

A Reputation Built on Strong Values

An existential crisis for the franchise ensued within the first year when the franchisor of American Lawn Service went into bankruptcy and Tyrrell was asked by their bank to buy out the enterprise for what today would only amount to the cost of a fine dining experience for a family of five!  With the goal of ultimately impacting the landscape using the principles learned in his upbringing, Tyrrell quickly built a reputation for adding value to the landscapes of Greater Milwaukee. He developed a client base with long-standing relationships that still persevere to this day.

As the company outgrew its facilities, Tyrrell migrated his business to a small shop, first in Butler, and eventually to the southern end of Menomonee falls, which in the mid 1970’s, was still a sleepy farming community.

As the company grew, so followed the need for more equipment and increasingly larger facilities. American Landscape settled at its current location on Kohler Lane in Menomonee Falls in 1989. At the time, Kohler Lane was an empty road next to a farmer’s field. Today it is part of a bustling business park which houses Kohl’s Corporate headquarters among a number of other businesses, adjacent to fully developed residential subdivisions.

The offering of services expanded rapidly with Tyrrell changing the company name to “American Landscape” in 1993 which better suited its vastly more diverse identity.  For decades, Tyrrell served as the company’s guiding light. His experience in landscape maintenance, design and development, and snow management services are steeped in breadth. Until 2018, Tyrrell had worked, planned, and helped lead in every aspect of the company’s existence.

In the late 1990’s and early 2000’s, Tyrrell and his son, Shea began to have long distance discussions about joining the family business as Shea had a desire to run the company.  Shea’s training was as a CPA and at the time was serving as a controller for a manufacturing company in Tennessee. With the timing being right, in 2002 the talk became reality:  Shea uprooted his young family and returned to his roots in Wisconsin to help shape the next phase of American Landscape’s future.

In the time since, Shea has made it his mission to take American Landscape to the next level. Under his leadership, the company has experienced significant growth in all key company landscape service ventures, particularly in design and development, a stronger supervisory staff, an advanced sales team, and implementation of fresh ideas for productivity and customer service.

In 2004, Shea became President of American Landscape and created American Snow Professionals. This important division of American Landscape had the ability to focus exclusively on commercial snow and ice management.  As American Snow Professionals grew, the company expanded its facilities to include a state-of-the-art salt storage building which protected its winter clients against the possibility of salt shortages affecting their winter service. The facility houses more than 5,000 tons of salt, allowing the company the capacity, standing alone against any other local competitor, to literally guarantee more than an entire season’s supply of salt prior to the first snow flake falling.

At the same time as the snow operation grew, so too have the company’s landscape design and construction operation, commercial and residential landscape maintenance, as well as its r divisions. Today, American Landscape is a mainstay at the forefront of the Landscape and Snow Management industries, offering comprehensive services toward total property care and improvement. Since 2019, the company has been recognized by the Wisconsin Landscape Contractors Association with an astounding 20 project location awards of excellence in landscape design/construction and landscape maintenance – more awards of excellence than any of its statewide peers.  In addition, the National Association of Landscape Professionals has recently recognized American Landscape for its second-to-none safety program.

During Shea’s tenure, the company redoubled its efforts to have the newest and best-kept equipment in the industry.  In 2021, the corporate offices were gutted down to the studs and transformed into a modern, inviting and efficient environment with improved use of space for better functionality as well as the incorporation of cutting-edge technology.

While it feels great to grow as a company and gain recognition, the company accomplishment Shea feels strongest about has been building an ever-stronger sense of company family. Shea aspires for American Landscape to be the kind of place where every person is treated with an equal level of human dignity and respect, regardless of status or position. Shea believes strongly in developing the next generation of leaders in the company and sees appreciation, loyalty and recognition as ways to show that no contribution is too small. The ultimate reward is seen in the personal and professional advancement of team members, as they harmoniously work together to continuously evolve and do it better, becoming the best version of themselves along the way.

Shea personally recognizes positive contributions of individual members at company-wide meetings held every 2 weeks.  At American Landscape, anyone from any background can make a meaningful contribution, even in a short period of time.  By recognizing those contributions, the company builds a culture that reflects not only what clients see on the outside–with the best trucks and equipment in the industry, and professionally uniformed team members–but the imperative of what must be true on the inside with team members that are treated as important as anyone and everyone, given opportunities to grow, succeed and feel valued for their efforts each and every day.

Personal Backgrounds on Tyrrell and Shea

Tyrrell and his wife Kathleen have 5 grown children, 21 grandchildren and 5 great grandchildren.  Tyrrell finally decided to retire from American Landscape in 2018 just shy of his 80th birthday but still pops in from time to time for a friendly visit and to take in the latest developments.  He stays tremendously busy serving his church, St Joseph of Wauwatosa, especially by teaching others about Christian faith, a return to a far earlier calling that he vigorously pursued as a younger adult before the days of American Landscape.  Tyrrell still allows himself plenty of time with family…and an endless number of small projects in the same home where it all began nearly 50 years ago.

Shea married his college sweetheart, Mindy, in 1994.  Shea and Mindy have 7 children ranging in ages from 9 to 27, and now 2 grandchildren.  They are members of Saint Dominic church in Brookfield where American Landscape proudly donates the landscape maintenance services for the 20-acre campus.  Shea is particularly proud of the company’s work in the beautiful Prayer Gardens on the church grounds.  Shea spends a lot of time with his large and still growing family but always enjoys taking a little time to make a new friend wherever life may take him in any given day!

Want to stay in the loop?
Sign up for our newsletter.